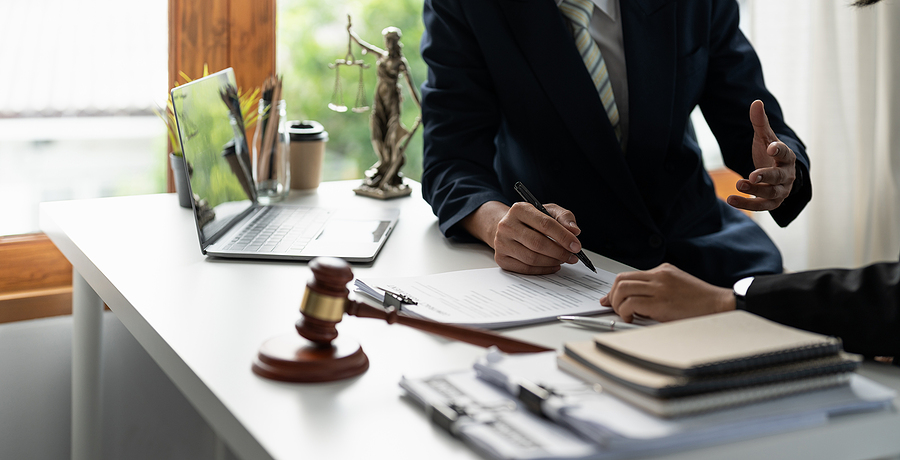 (ThompsonLawSTL) You signed a contract.  Maybe to buy a house.  Maybe to sell your used record collection.  Maybe to get your master bathroom renovated.  Now the other party is refusing to follow through with the contract!  What do you do?

You have a potential breach of contract claim.  To prove a claim for a breach of contract in court, you have to prove four things: (1) a contract existed that had specific terms; (2) you performed under the contract or offered to perform under the contract (basically, you held up your end of the deal); (3) the other party breached the contract (the other party didn’t hold up his or her end of the deal); and (4) you suffered damages because of the breach.  Kevney v. Mo. Military Acad., 304 S.W.3d 98, 104 (Mo. banc 2010).  A breach must be “material,” a party who receives imperfect but substantial performance cannot afterward sue to cancel a contract and then receive the full value.  Campbell v. Shaw, 947 S.W.2d 128, 131-32 (Mo. App. 1997).  If a case goes to a jury, the decides whether a breach is “material” and will consider any degree of hardship on a breaching party, the extent to which a party has received substantial benefit, and the adequacy with which he or she may be compensated for a partial breach by damages.  Id.  (internal citation omitted).

To prove the first element, the existence of a contract, a copy of a written contract is often all that’s needed.  What if it’s not written?  Are you out of luck?  Not necessarily!  Missouri allows enforcement of verbal contracts under many circumstances as long as the contract is sufficiently specific. See, e.g., Risch v. Risch, 72 S.W.3d 274 (Mo. App. 2002). Verbal testimony and also documentation may be used to prove the terms of a verbal contract.  Vaughan v. Singleton, 584 S.W.2d 186, 188 (Mo. App. 1979).  For example, one potential way to preserve the terms of a verbal contract for yourself might be to email yourself your understanding of the agreement shortly after it is reached.

Then, you have to prove you performed your end of the contract.  The evidence to prove this element likely will depend on the nature of the contract.  If you paid someone $30,000 to renovate your house you’ll want to have a copy of the check you used to pay.  If you promised to clean a garage for $200, take a picture before you do the work and after it’s finished.  If you’re a contractor, keep work records and take photos showing work-in-progress.

Third, you have to show the other party “materially” breached the contract.  A plaintiff who receives imperfect but substantial performance cannot afterward sue to cancel and recoup the full value of the contract.  Campbell v. Shaw, 947 S.W.2d 128, 131-32 (Mo. App. 1997).  A party materially breaches when it fails to substantially perform.  Fox Creek Constr., Inc. v. Opie’s Landscaping, LLC, 587 S.W.3d 746, 750 (Mo. App. 2019) (internal citation omitted).  When a defendant commits a material breach, the plaintiff is excused from performing, may cancel the contract, and may sue for damages.  Campbell, 947 S.W.2d at 131.

A court will consider the hardship to a breaching party, the extent to which the non-breaching party has received substantial benefit, and the adequacy with which he or she may be compensated for a partial breach by damages.  Id. at 131-32.

Finally, you must show damages and have three avenues available: (1) actual damages; (2) consequential damages; and (3) benefit-of-the-bargain damages.  Cason v. King, 327 S.W.3d 543, 548 (Mo. App. 2010) (internal citation omitted).  A plaintiff does not have to limit recovery attempts to only one measure of damages but cannot be made whole more than once.  Id.  These categories overlap, at least in part, and opinions often conflate actual damages and benefit-of-the-bargain damages, which are described as the “net profits a plaintiff would have realized had the contract not been breached.” See, e.g., Arcese v. Daniel Schmitt & Co., 504 S.W.3d 772, 782 (Mo. App. 2016) (internal citation and quotation omitted).  Overall, the Court will try to place the injured party in the same position he or she would have been in had the contract not been breached.  Id.

Consequential damages are those damages naturally and proximately caused by the commission of the breach and those damages that reasonably could have been contemplated by the defendant at the time of the parties’ agreement. Ullrich v. Cadco, 244 S.W.3d 772, 779 (Mo. App. 2008) (internal citation omitted). Damages arising from mere inconvenience are not recoverable, but if the inconvenience is coupled with a compensable element of damage, the inconvenience occasioned by the breach may be compensated where it is supported by the evidence and shown with reasonable certainty.  Crank, 692 S.W.2d at 403 (internal citations omitted).  Loss of use also constitutes compensable damage.  Id.

Proving a breach of contract claim can often be relatively simple as long as you keep the elements in mind and have documentation.  Keep your receipts!

View our listing on STL.News

So you’ve just been in a car accident in Missouri